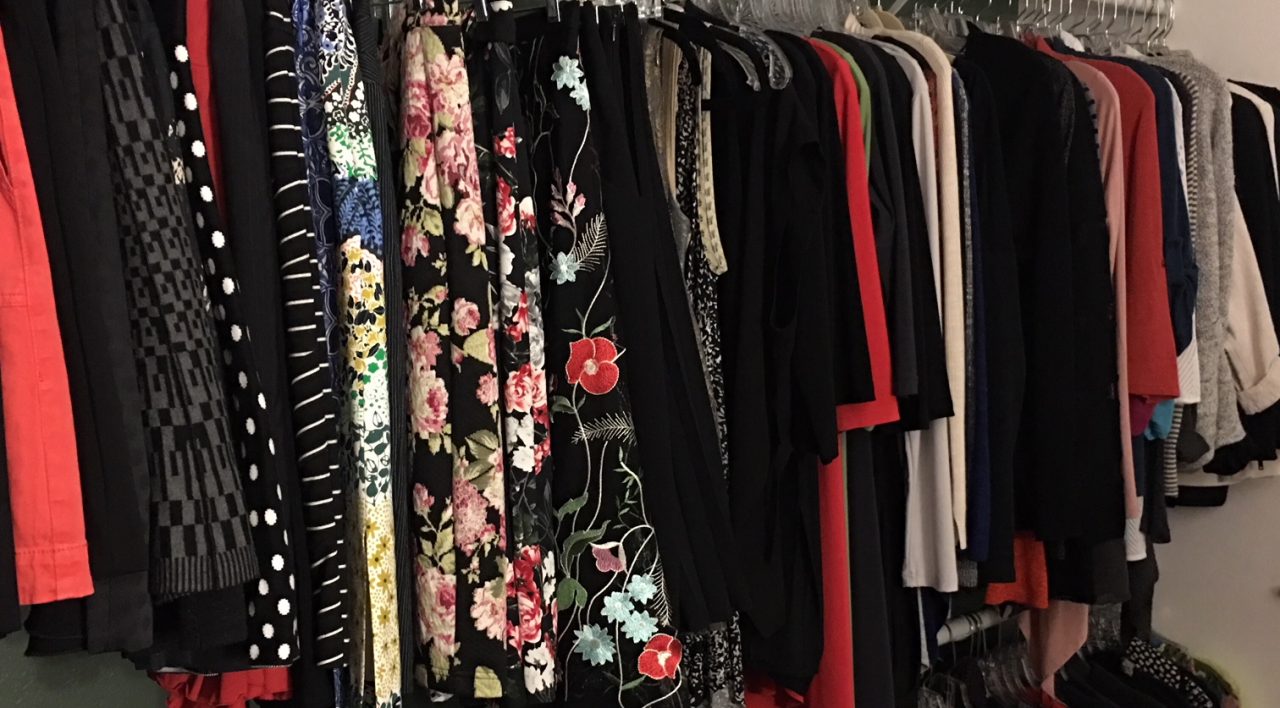 Amazingly, I’ve come very close to having purged unnecessary items from the entire house. Sadly, the prime offenders have yet to be addressed: the garage and the under-house storage area. The former is not too bad, but the latter is a catchall for everything from furniture and fitness equipment to bikes and books. It’s also the place where we want to build a wine cellar, and that won’t happen until the area is cleared out. That’s not gonna be fun, but we’re determined.

I also have to go through my wardrobe, but since I do that periodically, it’s not a big deal. I’ve come to the conclusion that I’ll never have enough closet space no matter how much stuff I give away…no matter how many closets I expand into…no matter what. As long as I’m style aware, I will be closet challenged.

Another several hours of merciless purging has led to two boxes of useable giveaway items, a rather large bag of recyclables (remind me again why I was saving all those burned-down glass candleholders and empty reed diffusers…), and a bag of trash. The result: one empty shelf in the kitchen and an empty drawer in the front-hall chest. Success!

When I was reporting my progress to my friend Carolyn, she mentioned that her niece is moving back to the U.S. from Japan…and she needs everything. It was music to my ears! As good as unloading feels, it’s even better when my don’t-want-you-anymore items can be used by someone else. So I packed up a set of dishes and mugs, glasses, brand-new cloth napkins (we have far too many), and a few incidentals. And it felt great.

Perhaps the best part of all of this is that I’m discovering things I didn’t know we had and unearthing things I’d been looking for for months. (So that’s where those red votives were! Why couldn’t I find them before Christmas?)

I’ve already begun the office purge, and my desk drawers are pristine. It was rather amusing to come across business cards from people whose names didn’t even sound familiar to me. (More fodder for the recycling bin.) I also found a card from an old friend in LA, and I tracked him down on Facebook. Clearly, the advantages of this process extend far beyond mere tidiness and space.

Outdated client files are next, and that will entail a lot of shredding. More music to my ears.

It began in the kitchen, and it took about three hours. I went through every cupboard and started purging: juice glasses that we replaced but never got rid of…dishtowels and oven mitts that have seen better days…plastic organizers that came with our refrigerator but were never used because they take up too much room. I also went through every item in the pantry and the fridge and got rid of expired things–scary how quickly they accumulate now that my two ravenous boys are no longer living here. What remains stands like a field of soldiers ready for battle: poised and in tidy little rows.

I’m the sort of person who feels bad about throwing away good food, and I stared guiltily at the two pounds of ricotta left over from my Christmas lasagne making. And then I made a cheesecake.

This process feels really good, but I wonder how long it will last. To do it properly will take weeks, and my enthusiasm may wear off by then…or sooner. I’m also under deadline to finish a new book, and that pressure may supersede the purge. But I’m on it for now, and we’ll see where it goes.

I do not receive any form of compensation from the stores or designers whose products I feature.